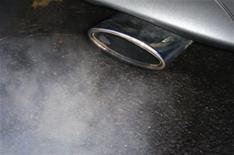 Carbon dioxide emissions in the UK have been slashed thanks to the scrappage scheme and recession, according to new figures from the Society of Motor Manufacturers and Traders (SMMT)

The SMMT's report reveals that average CO2 levels for 2009 were down 5.4% to 149g/km, compared with figures for the previous year.

Biggest fall since records began
The drop is three times as fast as the average annual rate recorded since the study was launched in 1997 and is, in part, caused by motorists turning to more economical cars, and the scrappage scheme cutting the number of older, less efficient cars on the road.

Although the scrappage incentive doesn't impose a CO2 cap, the average emissions of cars bought through the scheme so far is 133.3g/km 26.8% less than the average scrapped car.

Incentives need to be ongoing
SMMT chief executive Paul Everitt said: 'While scrappage incentives made a positive contribution to fleet renewal in 2009, there is a risk that over the next few years motorists might be deterred from investing in the latest technology.

'Developing a long-term and consistent approach to vehicle taxation and environmental incentives will be important in maintaining the current rate of improvement.'

If the current rate of reduction in emissions continues, the UK will hit the 2015 average new car emissions target of 130g/km set by the EU, and which comes into force in 2015.