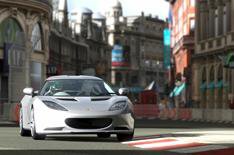 Can't wait until next spring to drive the new Lotus Evora?

Then you'd better get along to the Lotus stand at the British Motor Show before the end of this week and demand an immediate test drive.

Unfortunately, they won't fire up the stand car and let you loose but they will let you drive the Evora on a special edition of the Gran Turismo 5 Prologue PlayStation computer game.

The car has been developed by the game's designers so that it closely mirrors the anticipated performance of the Evora, which is powered by a 3.5-litre engine.

Visitors to Lotus' stand at the motor show can drive the car around the Gran Turismo game's London City Circuit, taking in Piccadilly Circus, Charing Cross and Trafalgar Square.

For now, the Evora is only available on the versions of the game on Lotus' stand. However, it is expected to be released as a download for gamers at a later date.