Drivers still texting at the wheel 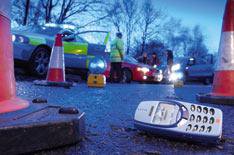 A new campaign has been launched to highlight the dangers of texting while driving, after research revealed that 30% of young drivers are still sending messages from behind the wheel.

The research, carried out for road safety initiative Think!, revealed that 93% of those questioned agree that texting while driving is dangerous, but 12% of all motorists also admit to sending such messages when behind the wheel.

The new radio campaign features a driver's voice spelling out a text message followed by the sound of a car crash.

Road Safety Minister Jim Fitzpatrick said: 'It doesn't matter how good a driver you are, if you text while driving then you cannot be giving the road your full attention.

'The message that mobile phones and driving should not mix is getting through to the majority of drivers, but some people are still needlessly risking their own lives and putting others in danger for the sake of a text or a call.

'Our message to all drivers is simple: don't use your mobile phone when you're driving.'
The new radio advert will launch on Monday, May 4 and is particularly targeted at young drivers.