More for you |
DVLA warns of 20% increase in car scamsWhat Car?'s top 10 used electric cars (and the one to avoid)10 most unreliable SUVsWhat Car?'s best cars for less than £250 per monthGuaranteed discounts on our 2020 Award winners - save up to £19,366
Home
News
Electric future
news

* Renault-Nissan Alliance boss * What does the future hold? * From electric cars to UK-production... 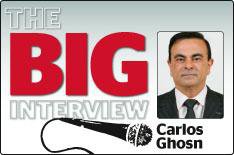 What Car? Renault and Nissan are early entrants into the electric car arena. Will we eventually see complete electrification in the longer term or, at least, an electric alternative in every model range in the medium term?

Carlos Ghosn We are early entrants but, more importantly, we are coming with real products on a mass-scale that will be available soon and to a wide range of customers. To date, we have announced plans for eight separate electric vehicles across the Alliance, and we have capacity to build 500,000 vehicles and batteries by 2014.

You might see many concept cars and test vehicles from other manufacturers, but no one has demonstrated the commitment shown by the Alliance. I see the role of electric vehicles as a complement to our existing range and not as competition for diesel or petrol-engine vehicles.

What Car? Do you have too much riding on battery swap technology and infrastructure?

Carlos Ghosn Not at all. The Alliance is not betting on any single technology for the recharging and infrastructure associated with electric vehicles. We have developed battery swap as a specific technology with our partners at Better Place for the Israeli market. For Europe, Japan and the US, all our electric vehicles will be capable of plug-in recharging.