More for you |
Big savings on our Car of the Year Awards winners2020 new car sales revealed: who were the winners and losers?Top 10 used SUVs for less than £10,000Used test: BMW 1 Series vs Mercedes A-ClassNew Dacia Bigster large SUV – what we know so far
Home
News
Electric supercar on sale, but not in UK
news

Electric supercar on sale, but not in UK 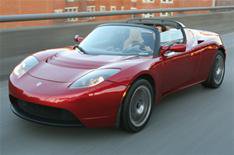 Lotus has begun production of the world's first electric supercar, although it's unlikely youll be able to get your hands on one.

However, despite being developed by Lotus and partially built in East Anglia, US-based Tesla Motors has no plans to sell the Roadster in the UK, or in any other European markets.

Instead, it will only be available in America - even then, all the 2008 models have sold out, and the order books for the 2009 models are reported to be filling up.

Tesla Motors also has plans for a five-seater sports saloon, to be introduced by 2010.