More for you |
Every 5-star car on What Car?Used test: Maserati Levante vs Porsche MacanNew issue of What Car? magazine on sale nowMost and least reliable small SUVsRevealed: the car makers whose discounts have got bigger since lockdown
Home
News
Equipment and trims
news 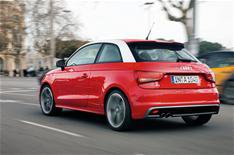 You're not short-changed when it comes to equipment, either, but having spotted that Minis rarely leave the showroom without several thousand pounds worth of options, Audi has made sure you can personalise your A1 to your heart's content. Some of the add-ons, such as the latest navigation and infotainment package, are available in only one other Audi the flagship A8. Next year there'll be a decal kit that makes the A1 look like a shrunken version of Hannu Mikkola's rally Quattro of the early '80s. Seriously.

At launch, the A1 will be sold only as a three-door four-seater to emphasise that it's a chic urban lifestyle car rather than a workaday supermini. Easy-entry front seats give all but the infirm a sporting chance of getting in and out of the back with some dignity, however, and legroom there is more than passable, but headroom is restricted by the inwards and downwards curvature of the roofline. Within an overall length of less than four metres there's still space for a boot that puts a Mini's to shame.

There are SE, Sport and S line versions, though not with every engine. You can't have SE trim with the 1.4 engine, for example. In return, as the sportiest engine until something livelier comes along and it will it alone gives you the option of a seven-speed twin-clutch semi-auto (S tronic) gearbox.

With each progression up the trim hierarchy you also get firmer suspension and bigger wheels. Now, you need to be careful here because the A1 is firm-ish to start with, and reducing the amount of suppleness in the damping and tyre sidewalls usually makes things worse. The cars we've driven all had what will be the softest SE suspension set-up, but the two larger wheel options. On 16-inch rims the A1's not too bad; on 17s it feels as if the tyres are made of concrete when driving around town. Most buyers will overlook this and go for the sharper looks that come with big wheels. Just don't say we didn't warn you. As for the handling, the A1 isn't as lively as a Mini, but it's light and easy in traffic and reasonably direct and agile at higher speeds.