* European Union plans legislation * Eyesight tests in twilight * Drivers would have to pay to renew licence... 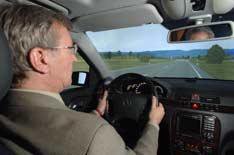 Business drivers may have to pay to renew their driving licence every five years as the European Union tries to clamp down on drivers with bad eyesight.

An EU directive scheduled to come into force in 2013 would result in the traditional test of reading a number plate from 20 metres scrapped.

Instead, the Government will have to come up with an 'appropriate investigation' of eyesight to cover visual ability, twilight vision and eye diseases.

Each driving licence would then carry a code alerting authorities to medical or eyesight problems. It is believed the eye test would cost around 20 and a new licence about 17.50.

The rules, which are being considered by the Department for Transport, would mean commercial drivers have their eyesight checked every five years and private drivers every 10 to 15 years.