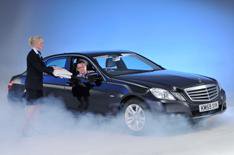 List price 30,005
Target Price 28,031
Run by Iain Reid
Why its on test To find out if Mercedes is back to its best in terms of quality and customer service

I reckon the E in E-Class stands for easy, because life with the Mercedes has been exactly that. Its easy to drive, easy to live with and (comparatively) easy on the wallet. As for Class, well, for the most part, running the Merc has been like flying First Class Ive been treated well, made to feel special and any issues have been quickly spirited away.

All of that was exactly what I was hoping for when I collected the car from the flagship Mercedes-Benz World showroom at Brooklands (0870 400 4000).
Handover team leader Jane Ghatta spent a good hour going through all the cars controls, and the options Id chosen.

The Navigation 50 system (1150) with iPod connectivity was top of the extras list, as it is for most E-Class owners. I also went for split-folding rear seats (391) and sunblinds (514), which helped the big exec in its main role as transport for my growing family. On top of that, I ticked the box for the 1150 Memory Pack, which meant I could push a button to have the drivers seat move into my preferred position after colleagues had borrowed the Merc.

The Mirror Pack (490), which provided electrically folding door mirrors and a self-dimming interior mirror, and metallic paint (606) rounded off the options. I still think 391 for split-folding rear seats is a bit rich, though.
After a long day working on whatcar.com, I just want a relaxing drive home, and that has undoubtedly been the E-Classs forte. Mercedes makes no attempt to go down the sporty route with this SE model, fitting it with 16-inch wheels and fat, squishy tyres that have ride comfort as their priority.

Over the past 12 months I made a few trips to visit family in Scotland and the car had an uncanny knack of making the 400-mile journey seem shorter. Even after six hours behind the wheel, I never felt tired or stiff.

Providing family comforts isnt necessarily the foremost talent of an executive car, but the E-Class proved good nonetheless. Things such as the hooks in the boot to hold shopping bags, and how the long rear seatbelts easily stretched around my daughters child seat, made things well easy.

E-Class ownership wasnt all sweetness and light, however. Mid-way through the year, I became one of the many C- and E-Class owners whose car has suffered fuel injector failure. This has been an embarrassing episode for Mercedes, because all 220 and 250 diesel C- and E-Classes built between the summer and November of 2009 were affected.

Brake lights were a 'bit blooming bright'My drama occurred late at night when I was in the outside lane of the M40 with my pregnant wife in the passenger seat and my three-year-old daughter in the back. Mercedes says injector failure is a refinement issue and not a safety one, but I certainly found the episode unnerving.

At least the motorway was quiet and I was near a junction when it happened, so I cruised off the carriageway and called Mercedes Mobilo breakdown service.