Fiesta vs Polo vs Corsa

* Ford Fiesta, Vauxhall Corsa and VW Polo compared * Leading superminis rated in all key areas * Best buys named - and the ones to avoid... 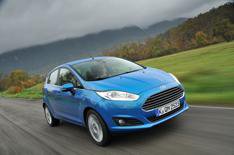 The Ford Fiesta, Vauxhall Corsa and VW Polo are giants among superminis - frequently among the best-selling cars in Britain, and a popular choice for everyone from small families to learner drivers.

Choosing between these cars has become harder as their ranges have diversified. All of them offer diesel engines, small turbocharged petrol motors, and three- or five-door versions, plus 'big car' features such as air-conditioning, electric windows and even climate control if you pick the right trim.

However, the good news is that some spectacular editions are available if you choose carefully and we've worked our way through the Fiesta, Polo and Corsa ranges to pick out the best options for you. Here are our thoughts.

What are the Fiesta, Corsa and Polo like to drive?
The sharpest drive on offer here comes from the Ford Fiesta. It changes direction with an immediacy that the other two cars simply cannot match, and has more than enough grip for corners, where it stays impressively flat.

It's a closer call on ride quality, for although the Fiesta remains the benchmark, its two rivals both offer enough suppleness and comfort. Just remember to stick to the Corsa's regular suspension and steer clear of the harder set-up that comes on SRi editions and with 17-inch wheels on SE and SXi versions.

The Polo is not as much fun as the Fiesta, because it does suffer from body lean in bends and the steering is inconsistently weighted. The Corsa, meanwhile, has steering that's almost too sharp; it's fine when you're pointing the car down a B-road, but you'll find yourself making lots of small corrections at motorway speeds.

The Polo's basic engines include ageing 1.2-litre three-cylinder petrol units, but the 84bhp 1.4 is a better bet. There's also a 1.4-litre turbocharged unit that turns off cylinders to save fuel when they're not required; it's probably the most advanced engine available in a car of this size, and is impressive to use, but it carries a hefty price premium.

The Corsa has three petrol engines and four diesels, but we'd avoid the 1.0 and 1.2 petrols because they struggle to maintain motorway speeds. The 1.3 diesel has decent performance but looks expensive, so the 1.4 petrol is our pick.

The Fiesta's star engine is the 1.0-litre three-cylinder turbocharged Ecoboost petrol, which comes in 99bhp and 123bhp guises; in truth, the more modest of these is plenty for everyday use, including a few motorway miles. There's also a 1.6-litre diesel, but it's pretty crude.

The Polo suffers a little from wind noise at motorway speeds, but road noise is well suppressed and the small four-cylinder engines (1.2 and 1.4 turbo, and the 1.4 non-turbo) are refined companions.

In this respect the VW has a narrow advantage over the Ford, because the 1.0-litre Fiesta Ecoboost has a distinctive three-cylinder thrum if you try to work it hard, and the 1.6 diesel has a disturbing clatter that never really goes away. The diesel engines (1.3 and 1.7) are the Corsa's weak spot, too but the rest of its editions are quiet enough, even when you're working them hard, and little road noise enters the cabin.

Can I get a Fiesta, Corsa or Polo as an automatic?
Should you want a car with only two pedals, the Fiesta forces you to choose a 1.6-litre petrol engine to get its dual-clutch 'Powershift' automatic gearbox. The Polo's 1.4-litre petrol engines (turbocharged and non-turbocharged) are available with a six-speed DSG dual-clutch automatic. Both of these options are by far preferable to the Corsa's automatic option, which is an old-school four-speed unit.

What are the Fiesta, Corsa and Polo like inside?
Most of the Fiesta's dashboard materials are reasonably plush, although most models get plain black plastic door handles, which look and feel cheap, and the finish lower down the dashboard (and on the rear door linings) has a low-rent feel. Nor is the Fiesta particularly generous in standard kit; entry-level Studio models are downright spartan, while the next trim up, Edge, gets air-con, remote central locking and front electric windows.

The Polo is the best for interior quality; all models have an impressively upmarket feel, with dense, soft-touch fabrics covering the dashboard, and solid-feeling switchgear. Again, the entry-level trim (S) is pretty basic, but move up to Match and you'll get remote central locking, air-con, alloy wheels and electric rear windows (on five-door models).

The Vauxhall's cabin is beginning to look a little old, although there are enough colour and trim options to help you avoid drab grey plastic. You get a CD player, remote central locking and electrically adjustable door mirrors on even the most basic model, while mid-range Exclusiv trim adds MP3 compatibility, more driver's seat and steering wheel adjustment, and an easier-to-expand boot. You'll need to pay a small premium for (AC) models if you want air-conditioning, though.

All three cars have a big enough boot to cope with a weekly shop, and low rear hatchback sills that make it easy to load and unload heavy items. The Corsa's is the largest load bay, but all three cars offer rear seats that fold down, and there's very little to split them on overall capacity.

What will the Fiesta, Corsa and Polo cost to run?
Despite the Polo's premium image, it's surprisingly affordable to buy and run. For starters, you'll find dealers keen to score a sale and willing to match the What Car? Target Price to do so. Secondly, fuel economy is respectable, particularly with the diesel models. Also, the Polo has cast-iron residuals that give it some of the best resale values in the class.

The Corsa is frequently discounted, and the accompanying low insurance rates mean that it can have an appealingly low entry point. You get a 100,000-mile warranty that brings peace of mind, and if you adopt a gentle driving style, even the petrol editions can offer decent economy. Just remember, though, that resale values are poor so make sure you get a good discount on the list price.

The Fiesta sits somewhere between the VW and the Corsa; it's not particularly loaded with kit at the bottom of the range, so the price can look high. Haggle hard and your dealer will slash thousands off the bill, though and that's just as well, because resale values aren't a match for the Polo's. The Fiesta is cheap to insure but the real-world economy of the 1.0-litre Ecoboost engine is some way short of the EU 'official' economy figure; bear that in mind when you're doing the maths.

All three cars score at least reasonably well on safety, but it's the Fiesta that has the best kit: stability control and seven airbags (including full-length curtain 'bags and a driver's knee 'bag) come as standard on all models. All three cars achieve the maximum five-star rating in Euro NCAP crash tests, although the Corsa's score is based on the older 2011 test, while the Polo's dates back to 2009.

Which one should I buy?
The best Ford Fiesta to buy is the 1.0 100 Ecobost Zetec Stop/Start 5dr. This 99bhp model has plenty of performance and excellent refinement, and Zetec trim brings you air-con, remote central locking, front electric windows and alloy wheels.

Our favourite VW Polo is the 1.4 85 Match 5dr, which is (just about) quick enough, yet sufficiently cheap to make the benefits of the premium-feel cabin and strong resale values look good value.

The Vauxhall Corsa we'd opt for is the 1.4 Exclusiv 5dr, which gets the best engine in the range and offers a fair compromise on price and equipment. We'd understand if you opted for the (AC) model, though, to get air-conditioning.

Of the three cars, the Fiesta is just ahead of the Polo primarily down to its sharp dynamics and recently improved interior and both of these models are further clear of the Corsa, which is beginning to feel its age. Even if your local Vauxhall dealer offers you a staggering discount (and most of them will), we'd suggest you try the Ford or VW before committing.