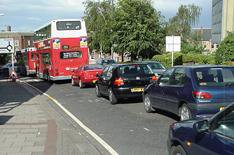 Motorists who leave their engines running while stuck in traffic jams will be fined 20 as part of a trial that will begin in January 2009.

Traffic wardens will give out the fines if they see drivers idling too long in traffic, especially in town centres.

Under the plan, which is aimed at reducing pollution, wardens would first issue a warning to any drivers they catch leaving their cars ticking over unnecessarily.

If a driver refuses to comply with the instruction, they will then be issued with the fixed penalty notice.

The scheme will be piloted in Shoreham-by-Sea in West Sussex from January. Signs are already in place at level crossings, ordering people to switch off their engines.

There will be exemptions for lorries with freezer units, and other drivers who have to keep their engines running.

If the scheme proves successful, it will be expanded across the country.