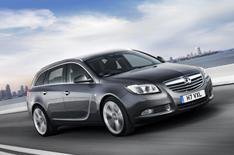 This is the Vauxhall Insignia Sports Tourer, which will be unveiled in the metal at the Paris motor show on October 2.

The three petrol and two diesel engines from the hatchback and saloon models are available in the estate, plus there's a new turbodiesel and a smaller-capacity turbocharged petrol unit.

No details of the performance or economy figures of the new engines have been released.

While the front end retains the styling of the saloon version of the Insignia, the bodywork behind the driver's door is completely new. The car is slightly longer than the hatch and saloon, but retains the same wheelbase.

As with the hatch and saloon, the Sports Tourer will also be available with front- and all-wheel drive, as well as Vauxhalls FlexRide system, which allows the driver to alter the ride.

The estate will go on sale in Spring 2009, with a low-emission version, branded Ecoflex, following shortly afterwards.

No official prices have been revealed, but it is expected to cost around 1000 more than the hatchback equivalent.