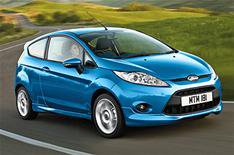 Doubts are growing that Ford will build a Mini-bashing hot ST version of its new Fiesta.

'It's something we are constantly looking at, but it's not in the programme at this stage,' said Roelant de Waard, chairman of Ford of Britain.

'The UK is the only market interested in hot hatches. There we sell 3000 of the current Fiesta ST a year, and that is three times the figure in the next-best market.

'With the way things are going with economy and emissions, we will probably sell more Econetic (high-economy, low-CO2) models in future.'

However, there is a glimmer of hope that a new ST will be built thanks to America.

The new Fiesta will be the first to cross the Atlantic since the original from the mid-1970s, so it goes there without any image baggage.

If the American market is judged to be interested in an ST model, it could mean Ford will sell enough cars to make it worthwhile developing a hot hatch.

However, initially the Fiesta will be sold in America as a saloon only, probably with a 2.0-litre engine and an auto gearbox.

However, if Ford USA decides to take the three-door hatch as well, it would have a car to rival the mega-successful Mini if there was a more powerful engine.

A 1.6-litre unit with around 175bhp would give the Cooper S a real fright. Ford could even call it Verve, like the concept car that preceded the new Fiesta.

Ford has confirmed that the new Fiesta will spawn a taller Fusion replacement, and says it will be a more exciting-looking car than the often derided, but commercially successful, current model.