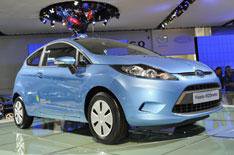 Ford tried to steal some of the Vauxhall Insignias thunder by unveiling a pair of new Fiesta variants and prices of the standard car.

The new Fiesta, which will go on sale in Sepptember, will cost from 8695 - 155 less than the outgoing car.

Ford Fiesta Econetic
Although the Focus RS is green in colour, it's hardly green in nature.

Step up, then, to the Fiesta Econetic, which is ensuring that Ford's environmental credentials are promoted just as strongly.

The car, part of the new Fiesta range, will be powered by a 1.6-litre diesel engine and emit 98g/km of carbon dioxide, putting it in VED road tax band A, for which there is no charge. It averages 76.3mpg.

The low-emission engine will be combined with low-rolling-resistance tyres, low-friction transmission fluid, lower gear ratios and some aerodynamic tweaks to reduce emissions.

Fiesta Zetec S
If lean and mean is more your style than lean and green, you can take a look at the first of Ford's sporty Fiestas on show in London.

Expect a Fiesta ST in due course, but in the meantime, the warm-rather-than-hot Zetec S is fitted with a new 118bhp 1.6-petrol engine.

It can power the Fiesta from zero to 60 mph in under 10 seconds, and the car can achieve 47.9 miles per gallon while emitting 139g/km of CO2.