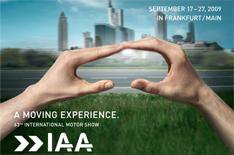 Renault says that some future models might not get a five-star crash-test rating because of cost. New EU regulations call for stability control to be fitted to most versions and for better whiplash, child-safety and pedestrian protection. 'We are in the middle of a big debate about this,' admitted marketing vice-president Stephen Norman. 'It requires a great deal of engineering investment and that will be reflected in the cost of cars.

Hyundai, basking in its sales successes from the scrappage scheme, will introduce nine new models at the rate of one every two months over the next year-and-a-half. They will include two new MPVs, including a rival for the compact Kia Venga; a small car based on the ix-metro concept at Frankfurt; and replacements for the i30, Marix, Sonata and Coup. Insiders say there are two possible designs for the ix-metro, one of which as not been seen in public.

Mercedes-Benz is to start bringing 'clean' diesel models to the UK, even though the Government will offer no incentives to people who buy them. A version of the new E-Class estate powered by a 3.0-litre V6 engine but with a chemical additive in the exhaust to eradicate the majority of nitrous oxide (NOx) and hydrocarbons emissions will lead the way. The car, badged E350 CDI Bluetec, meets EU VI emissions regulations not due to come into force until 2014 and is therefore massively less polluting. 'There are no CO2 disadvantages, but there could be implications for cost of ownership,' said Mercedes-Benz UK managing director Wilfred Steffen. One other model with the same exhaust clean-up system is already planned, and more will follow if buyers take to the idea.

Even luxury-car makers are having success thanks to the Government's scrappage scheme, it seems. Jaguar has so far sold 52 cars under the so-called 'cash for clunkers' incentive, which gives buyers 2000 off a new car if they turn in one 10 years old or more for scrap. Jaguar has even sold a couple of high-performance XF-Rs under the scheme.