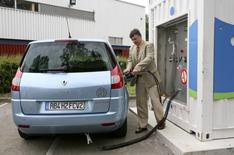 It's easy to imagine a perfect world where we all hum around in our high-tech fuel cell cars, but getting there is more difficult.

Although there are no harmful emissions from a fuel cell car, that doesn't automatically mean fuel cells are the answer to our green prayers.

If the energy used to produce the hydrogen comes from a coal-fired power station, for instance, there'll be an awful lot of CO2 emitted.

Even if wind farms or solar panels are used to produce the hydrogen instead, many think it's still a waste of time and, more importantly, energy.

They argue that the energy returned on the energy invested (EROEI) is too low to justify the use of hydrogen over, say, pure electric vehicles running on batteries charged from the mains.

In other words, there's not much energy in hydrogen and it takes too much energy to produce it. Some think hydrogen is even a bit like celery, the vegetable that supposedly requires more energy to eat than it gives your body, in that it contains less energy that it took to produce - a minus EROEI figure.

If or when that hurdle is overcome, there's still the difficulty of storing and distributing the fuel.

Since it doesn't contain much energy by volume - around a quarter that of petrol - hydrogen needs to be highly pressurised so that enough of it can be carried to give a car a reasonable range, which means vehicles will need a big, heavy tank.

It also means that hydrogen deliveries to forecourts will need to be under pressure. Hydrogen also means massive investment, because an enormous infrastructure will be needed so that tanks can hold enough fuel to match demand.

Apart from the cost difficulties posed by the lack of any economy of scale, fuel cell stacks need huge amounts of precious metals for them to work. That makes them expensive to produce and to buy.

So will we see them in regular production soon? Well, Renault isn't committing to anything. 2010 used to be a popular date bandied about by auto industry experts for the first hydrogen cars, but now they're saying 2020 - perhaps.

The truth, unfortunately, is that nobody knows.