More for you |
LISTEN: Car of the Year PodcastNew issue of What Car? magazine on sale nowPromoted | 5 reasons why it makes sense to go electric todayBig savings on our Car of the Year Awards winnersWhat Car? Awards 2021: The best cars you can buy
Home
News
Geneva motor show 2012: Bentley EXP 9 F
news

* Bentley SUV revealed * Expected to be fastest and most expensive SUV * Luxury rival for the Range Rover... 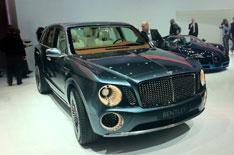 This is the Bentley EXP 9 F concept car, which has been unveiled at the Geneva motor show, and previews a super-luxury all-wheel drive SUV.

The EXP 9 F is a Range Rover-sized car, powered by a 6.0-litre 12-cylinder engine and has been designed to showcase what a third Bentley model could look like.

Officially, the EXP 9 F is still a concept car and will be used to garner opinion as to whether it will make production, but company boss Wolfgang Durheimer is already openly talking about a final production version going on sale in 2015.

The final car will become 'the fastest, most prestigious and most expensive SUV', Durheimer revealed to What Car?.

As such he is predicting a starting price of around 150,000 and initially it will only be available with a newly developed version of the companys W12 engine, producing around 600bhp, going through an eight-speed gearbox.

However subsequent powerplants could include a V8 diesel and a plug-in hybrid, combining a V6 petrol engine and battery power. The new Bentley SUV will also be built using the VW Groups new MQL architecture and so will share other components from the next generation Audi, VW and Porsche models including the next Q7, Touareg and Panamera saloon.

The EXP 9 F concept car has been styled at the companys HQ in Crewe, Cheshire, under the direction of design boss Dirk van Braeckel. The brief was that 'it must look like a Bentley' so inside and out it has similar styling cues to existing models, but with a more modern twist.

Overall its less boxy-looking than a Range Rover with a more tapered roofline and bonnet, and shallower glasshouse. From the front it shares a similar look to the Mulsanne saloon, with the same large round headlights and grille treatment. While towards the rear it has similar rear haunches to the Continental GT and also adopts a Range Rover-style split tailgate. The lower part of the tailgate is strong enough for two adults to stand on it to watch events from, apparently, or the base can be converted into two seats for a picnic. Two picnic hampers are also built into the show cars boot.

It is taller and wider than a Porsche Cayenne but not as lofty or as wide as a Range Rover. Yet, according to van Braeckel, it offers significantly more rear space than either, with 'close to the limo-like space of a Mulsanne saloon', he said.

The concept car is a four-seater but company insiders admitted that the eventual production version may just have a three-seat bench depending on feedback from potential customers. The rear seats also slide forward to create more luggage space.

Even the show car exhibits the same high level of cabin craftsmanship familiar from Bentleys saloons. 'Customers need to open the door and say wow, Durheimer told us.

New features for the show car include a floating infotainment screen that disappears into the dash when not in use. For the first time in a Bentley theres an electronic instrument panel, but analogue dials remain.

The companys engineers are also keen to ensure that the production SUV retains Bentleys traditional command driving position so that you can see both front corners of the car from the drivers seat and have good all-round visibility on the move too.

Even at this early stage senior company personnel are already setting out what the SUV will feel like on the road. Head of engineering, Ralf Frech, told What Car? he is aiming for a car that feels sportier than a Range Rover but offers better ride comfort and refinement than a Porsche Cayenne Turbo.

The final car wont have special off-road equipment such as a transfer box but Frech is also keen to ensure that it performs well off-road. 'We will build a real SUV, not a fake, he said. 'It wont be the best off-road but it will be really good.