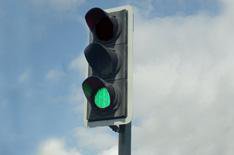 Motorists who keep to the speed limit could benefit from fewer red traffic lights, it has been revealed.

The Department for Transport (DfT) has previously resisted the 'green wave' scheme, whereby drivers travelling within the speed limit trigger sensors, which then produce a succession of green traffic lights.

DfT officials had opposed such a scheme because they believed it would cut revenues from fuel taxation. However, the system has been used successfully in other countries where it has helped to cut CO2 emissions produced by road transport.

The RAC's motoring strategist Adrian Tink said: 'Green wave is a common sense win-win initiative that will actually help motorists as they go about their daily lives as well as reduce carbon emissions.

'Let's hope this is the start of motoring being seen by policymakers as more than just an easy target for tax revenue.'

Green groups have welcomed the move, but they also say it fails to offer any long-term solutions to traffic congestion and associated pollution.