* Hondas small SUV Urban concept based on Jazz * Aimed to rival Nissan Juke and Renault Captur * Expected to launch in 2014... 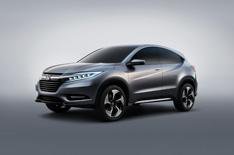 The Honda Urban concept car has been revealed at the Detroit motor show, and will eventually become a rival to the likes of the Nissan Juke and Renault Captur.

The Urban sits on the same underpinnings as the Jazz supermini, but is aimed at a different buyer. The production version is expected to offer the same engines as the Jazz, as well as coming with a hybrid option.

Honda says that the new SUV will also come with the companys Magic Seats system that appears in the Jazz.

However, there is not yet any official confirmation on whether the production car will be called the Urban.