More for you |
Why does the new Hyundai i10 get five stars?2020 Hyundai i10 city car revealed: price, specs and release dateBest automatic cars for less than £20,00015 brilliant new cars and the bargain used alternativesNew Hyundai i10 vs Volkswagen Up
Home
News
Hyundai i10 gets a face-lift
news

Hyundai i10 gets a face-lift 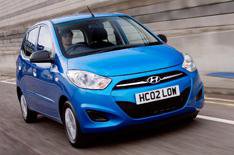 Hyundai has given it i10 city car a face-lift and added an all-new, low-emission version at the same time.

The updated i10 goes on sale from March 1, and includes styling and specification updates.

All-new i10 Blue
Hyundai has also introduced a new Blue version of the i10, which is powered by the 1.0-litre 'Kappa' engine. Its sub-100g/km CO2 emissions mean it will be exempt from the London Congestion Charge.

The revised range consists of four trims: Blue, Classic, Active and Style. Features such as air-con, and MP3 connectivity are now standard. Four airbags, a six-speaker stereo, electric windows and central locking are also standard on all models.

Prices start at 8195 for the entry-level Classic model.