* Updated i10 for Paris motor show * 99g/km version * Slight price rise when it goes on sale in January... 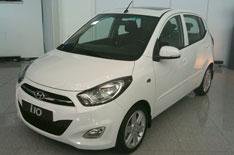 This is Hyundai's a face-lifted i10, which is due to make its debut at the Paris motor show later this month.

The car will go on sale in January 2011, with prices tipped to rise around 200 compared with the current model's.

As predicted, the updated i10 will feature a new low-CO2 model, emitting just 99g/km. It comes with a three-cylinder 1.0-litre petrol engine, with engine stop-start and variable valve timing.

This version won't be an entry-level model, and will probably cost around the same as a mid-spec 1.2 Hyundai i10.

Hyundai has tweaked the trim names for the i10, the range is now Classic, Active and Style. The low-CO2 model, called Bluedrive, will have the same specification as Active models.

The updated car has the hexagonal grille adopted by all new Hyundais, plus new bumpers and lights.The indicator lights have moved up into the door mirrors, too. There's a new silver surround to the centre console, all version have a gear-shift indicator and cars have blue lighting on the dash.