Jaguar XF is What Car? Car of the Year

* First ever Car of the Year win for Jaguar * Ford is primed to sell Jaguar and Land Rover * British wins for Land Rover and Mini... 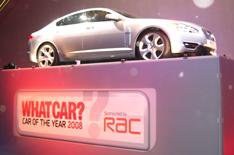 The all-new Jaguar XF is What Car?'s Car of the Year.

The Jaguar beat 14 category winners during a glittering ceremony held at the Grosvenor House Hotel on London's Park Lane this evening.

Sponsored by the RAC, the competition is in its 31st year and regarded as the 'Oscars' of the motoring industry.

The Jaguar XF is available to order now, costing from 33,900. Deliveries of the first models ordered will begin in March.

What Car? editor, Steve Fowler, said: 'It's a crucial time for Jaguar as the sale of the company draws closer. Judging by the XF, its future looks very good indeed.

'The XF has it all it looks fantastic and has a classy, futuristic interior that gives it a real sense of occasion. On top of that it's great to drive, whatever mood you're in, and is a sound ownership proposition, too.'

Speaking at the event Mike O'Driscoll, Managing Director of Jaguar Cars, said: 'All of us at Jaguar are delighted that What Car? have named the new XF Car of the Year. It's especially gratifying as What Car? has such a great reputation for representing the British consumer.'

Meanwhile, What Car?'s Green Award went to BMW and Mini for the first time. The award recognises the company's achievements in using clever technology to reduce carbon dioxide emissions across the whole range of BMW and Mini cars.

'Nobody has done more to reduce CO2 for buyers of all types of car,' said Steve Fowler. 'Whether you're a supermini buyer or looking for a large 4x4, BMW and Mini offer some of the greenest cars on the market.'

Audi came away with the most trophies, including Best Performance Car for the new R8 and Best Coupe for the TT. Ford's new Mondeo was named Best Family Car and Best Estate, while last year's Car of the Year, the Vauxhall Corsa, was again named Best Supermini.