* Concept car to be made * Will carry name of original concept car * Buyers can personalise car... 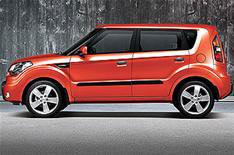 Kia has confirmed that its next 'lifestyle' 4x4-lookalike will be called the Soul after the original concept car.

The Soul first appeared at the 2006 Detroit motor show, before a trio of subsequent Soul concept cars were exhibited at this year's Geneva motor show.

They were created by Gregory Guillaume, with input from chief designer and ex-Audi design boss Peter Schreyer.

The new front-wheel-drive Soul will be unveiled at the next Paris motor show. Guillaume said: 'Because the new Kia Soul is not a replacement for an existing vehicle, it can be a bit of a rebel. The trio of Geneva concepts were appetisers for the new model launch at Paris.'

When it does arrive, the car will offer buyers a high degree of personalisation, Schreyer said: 'Through a variety of options, accessories and colours, they will be able to personalise their Kia Soul and create a sense of individuality, making their new car a true reflection of their personality.'

The Soul will be built in Korea from September, with the first cars reaching the UK early next year. The Soul is expected to be powered by the 1.6-litre diesels used in the Cee'd range, as well as 1.4- and 1.6-litre petrol options.