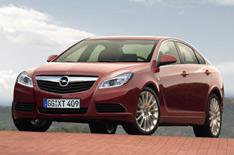 These are the latest computer-generated images of the Vauxhall Insignia, which will be launched at the British Motor Show in July.

The images reflect details that have been seen on test cars undergoing evaluation in Europe, including subtle detailing on the front and rear light clusters.

The Insignia will replace the Vectra, which has been produced since 1995. More than one million Vectras have been sold to date.

The company says the name change is necessary because its new car will move Vauxhall's image upmarket.

The Insignia could go on sale at the end of this year or early in 2009.