Leafs to race at Grands Prix

* Nissan wants to race its electric Leaf * Celebrities could race cars ahead of F1 races * Nissan has a race-ready Leaf the Leaf RC... 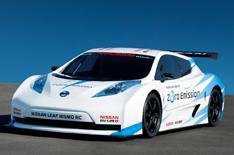 Nissan hopes to promote its Leaf electric car by racing it in front of Formula One fans.

The car maker has developed a racing version of its Leaf electric car, the Leaf RC, and is in discussion with various race promoters.

One idea is that the races would run ahead of each F1 event to highlight motorsports environmental credentials.

Nissan motorsport boss Simon Sproule said: 'There's a lot of interest, and it would be a great thing to do, but nothing's confirmed yet. It would require agreement from the relevant parties, and we'd be happy to build the hardware, but a sponsor would have to come on board to make it happen.'

The races would likely last 20 minutes, because that is the maximum time the race Leaf's battery will last when driven at competitive speeds. Sproule added that the cars could be run silently, or be tuned to create sounds to add drama.

One idea is that celebrities would drive the cars to help maximise exposure. Nissan has already confirmed it will build 10 race-ready Nissan Leafs this year through its performance branch, Nismo.

The RC cars have the same battery, motor and inverter as the Leaf, but have sportier bodystyling dropped onto a spaceframe body. They are expected to appear in hillclimbs to begin with and may run at this year's Goodwood Festival of Speed and the Race of Champions.