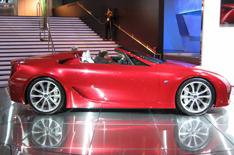 Lexus has presented its LF-A in roadster form, although it remains a concept car at present.

Based on the aluminium and carbonfibre body of the LF-A coupe, the two-seater is also powered by the same 500bhp 5.0-litre V10 engine, which is mid-mounted.

No 0-60mph times have been given, but Lexus admits it will top 200mph.

Before you get too excited, though, take a deep breath: there's no news on whether it will be built.