More for you |
Used Ford Fiesta long-term test reviewWhat can I do about a security issue on my car? Best cars for less than £250 per monthWhy is my new car’s fuel economy so poor?Top 10 used electric cars
Home
News
Lollipop wardens armed with cameras
news

* Devices will record abuse * Motorists will be prosecuted * 1400 incidents of abuse or attacks last year... 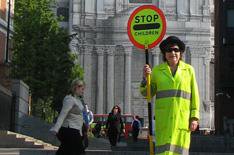 Lollipop men and women are being armed with video cameras to counter road-rage attacks.

The cameras, which are located in the carrier's lollipop or hat, record drivers who refuse to stop or who are abusive, providing crucial evidence in prosecutions.

A total of 1400 lollipop wardens were verbally abused or assaulted last year, with many needing hospital treatment.

With pay of just 6 an hour and only two hours' work a day, local authorities struggle to find enough wardens, and a third of posts are unfilled in some areas.

A warden holding a lollipop has the same legal power as a red light. Drivers who refuse to stop face a 1000 fine or three points on their licence.

The School Crossing Patrol Service was introduced officially in the 1950s. By 2005 a quarter of the country's 37,000 positions were vacant.