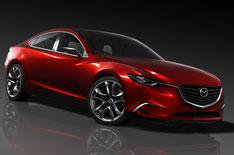 Mazda says it has developed a brake-regeneration system that will boost fuel economy by as much as 10%.

Called i-Eloop, the system converts energy generated under braking into electricity, which is then used to power the stereo, climate control and other electrical components and ancillaries.

The energy is stored in a capacitor, which, Mazda says, can be regularly drained and recharged without damaging its storage capabilities.

The system starts to reclaim energy as soon as the driver lifts their foot off the accelerator.

Mazda believes this is the first system in the world to use a capacitor, and it will appear in vehicles from 2012.

The system will make its debut at the Tokyo motor show, where it will be fitten in the Takeri mid-sized saloon concept car.

The Takeri will also use Mazdas new fuel-saving Skyactiv engine technology, which will be launched in the CX-5 small SUV in the spring.