Mazda rules out a city car

* No plans for a budget supermini * Collaboration also ruled out * New 3 and 6 are the priority... 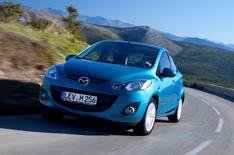 Mazda has no plans to sell a car smaller than its 2 supermini, company boss Takashi Yamanouchi has revealed to What Car?.

Despite previewing a Fiat 500 and VW Up rival in the Kiyora concept car in 2008, Mazda does not have the resources to produce such a car, Yamanouchi said, revealing that he wants to concentrate on core models such as the new CX-5 SUV and forthcoming replacements for the 3 and 6.

Mazdas boss also said that he is unwilling to produce such a car as a joint venture with another car maker because it is bad for the brand.

Yamanouchi admitted that, despite Mazdas push to create more refined and higher-quality cars, he had no desire for the company chase Audi and BMW in such markets. We would rather be at the top of the mainstream than compete with premium makers he said.