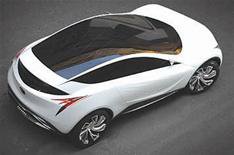 Unveiled at the Moscow motor show, the concept car is called the Mazda Kazamai.

The CX-5 is due to go on sale in 2011 and, although the production car is likely to be visually similar to the concept car on show, company bosses have hinted that it could be produced as both a three- and five-door model.

Mazda also claims the final production version will be at least 100kg lighter than its rivals to lower emissions, while power will come from ultra-efficient petrol engines.

The focus on improved efficiency is part of Mazda's plans to introduce a new range of environmentally friendly cars by 2011.

The companys stated goal is to improve the average fuel efficiency of its models by 30 % and reduce CO2 emissions by 23 % by 2015.