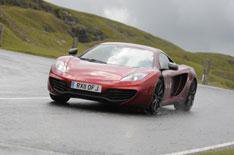 McLaren's new high-tech supercar will compete head-on with the Ferrari 458.

McLaren, so long synonymous with Formula One, is branching out. Under the newly formed McLaren Automotive brand, it will bring a range of high-performance cars to market over the coming years. This MP4-12C is the first of them, and is ready to take on Ferrari's magnificent 458 Italia.

As you'd expect from McLaren, the 12C is extremely high-tech.

It has a one-piece carbonfibre chassis that manages to be both strong and light, while the revolutionary suspension uses adaptive dampers and complex hydraulics to provide control rather than a conventional anti-roll bar.

Power comes from an all-new, mid-mounted 3.8-litre twin-turbocharged V8 with 592bhp and 442lb ft of torque, which it puts through the rear wheels via a seven-speed twin-clutch paddleshift gearbox.

Performance is shattering. Whether you're getting away from the mark or cruising along in a relatively high gear, burying the throttle brings a vicious surge of acceleration that few cars at any price (458 included) can match.

There's no let-up until the rev-limiter intervenes at a giddy 8500rpm, where one metallic click of the upshift paddle brings an impressively smooth and quick gearchange, sending you on your way again with even more jaw-dropping velocity.

What's more, you can carry an insane amount of this pace through bends. Most of this is down to the car's immense grip, which keeps it glued to the road at seemingly unthinkable cornering speeds. The body stays almost totally flat, yet there's enough compliance to prevent the car feeling from skittish or nervous.

Throw in the quick, consistent reactions you get from the steering, brakes and throttle, and the 12C feels utterly composed and predictable, no matter how fast you're going.

You'd expect the ride to be rock-hard, right? Wrong. Put the suspension in the comfiest of its three modes (Normal, Sport and Race), and the 12C is more comfortable than most family saloons. Bumps are dealt with smoothly at all speeds, and the ride is always beautifully controlled.

Refinement isn't bad, either. Sure, the engine sounds great under hard acceleration, but the noise melts away when you're cruising, and wind- and road noise are also well suppressed.

The Alcantara and carbonfibre-trimmed cabin looks smart and feels solid, even if it doesn't quite have the flair you expect at this money.

Still, there's enough space to keep you and your lucky passenger comfortable, and the figure-hugging seats are truly supportive. They're a pain to adjust, though, because the under-seat electric controls are hard to find and even harder to use.

However, play around for a while, and you'll find a great driving position with superb forward visibility. Granted, the 12C doesn't provide such a clear rear view, but not many supercars do. The boot's no bigger than the average supercar's, either, giving you just 144 litres of storage under the bonnet.

Let's face it, the Ferrari is the McLaren's only real competition it butchers everything else at this money. If you're wealthy enough to be choosing between them, you probably won't care that the 12C costs almost £5000 less and gives you 3.6mpg more.

No, the answer will depend purely on what you want out of your car.

There's the rub. McLaren's engineers have absolutely delivered on their promise to make the 12C faster, grippier, more comfortable, more efficient and more refined than all its rivals, the Ferrari included. Make no mistake, this car is a stunning technological achievement, and if any or all of those attributes are what you're looking for, the McLaren is the only choice.

However, as incredible as the 12C is, we think it doesn't quite match the 458 for sheer fun. It's so precise and unflappably composed that you actually feel slightly removed from the action.

The Ferrari, meanwhile, gives you a barrage of sensation when you're at full tilt, thanks to its frisky, tail-happy handling, its sharper steering and the more melodic wail you hear from its engine. For us, that makes the 458 more engaging and more exciting.

What Car? says
McLaren's supercar is an incredible feat of engineering