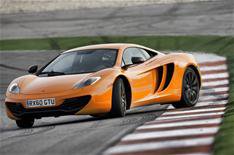 McLaren has revealed performance details of its new MP4-12C sportscar.

The headline stats are:

The car will go on sale in the spring for 168,500 and will be available through three dealerships in the UK Jardine Motor Group in London, Rybrook Motor Holdings in Birmingham and Sytner Group in Manchester.

The car is powered by a new 592bhp 3.8-litre twin-turbo V8 engine mated to a dual-clutch seven-speed gearbox.

Gearshifts are made by finger-tip controls mounted on a rocker behind the steering wheel. The driver changes up by either pulling with the right hand of pushing with the left, and vice-versa to downshift.

McLaren says it has built a new suspension system for the MP4-12C, claiming it can deliver 'executive car-like' ride quality with the sharp-handling expected of a performance car. Like the transmission, the suspension also has Normal, Sport and Track modes, which alter the damping and the stability control settings.