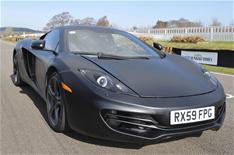 McLaren's MP4-12C supercar isn't going to be launched until next month, so in the meantime here's a preview video of prototypes testing in Spain.

McLaren says the car is already more stable at high speed than rivals think Ferrari 458 Italia and reckons it will go straight to the top of its class in terms of performance when it goes on sale in 2011.

Mark Vinnels, programme director for the 12C, said: 'The benchmark competitor vehicles we have tested become nervous and twitchy at higher speed, but the 12C feels more stable than anything I have driven.

'The team is working flat out. All this is geared toward not just achieving unprecedented levels of performance, but also guaranteeing levels of quality, reliability and durability.'

McLaren says 25 technicians and 12 engineers are working on finalising the car at the Applus IDIADA proving ground in Spain (pictured here). It says the team are working with the same intensity as a Formula One team.

And finally
McLaren also says the 12C will have the lowest CO2 output per bhp of any car on the road.