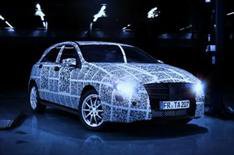 The new Mercedes A-Class has been revealed, as part of a marketing campaign in Germany.

The 2012 A-Class will make its public debut at the Geneva motor show in March and is due on sale in the autumn. Mercedes has released video footage of the all-new model as part of a promotion campaign, however.

In the video, a new A-Class is wrapped in QR-coded camouflage. A number of similarly clad cars will be driven across Germany as part of a competition, where entrants can download an app and then collect badges by scanning QR codes from the prototype cars, Facebook and Twitter.

The new A-Class has been previewed by a three-door concept car called Vision A, but the production car will be launched as a five-door.

The new models outline is clearly visible from the disguised prototype a three-door model is likely to join the range during 2013.