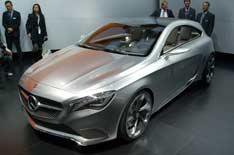 This is the Mercedes-Benz A-Class, which was unveiled at the Shanghai motor show today.

Mercedes says the concept brings in a new era for the companys small cars, and it has a far more sporty look than the current A-Class. Rather than an MPV-like profile, the car has a long bonnet and low roofline, and is based on a new front-wheel-drive platform that will underpin several new models, including the new A- and B-Classes.

Visually, it follows on from the F800 Style concept car that was shown at the 2010 Geneva motor show and said at the time to preview a replacement for the CLC, which will form part of the new A-Class family.

The strongly sculpted lines on the side are designed to give the Concept A-Class a coupe-like look, but perhaps the most remarkable part of the new car is the nose. Here, the grille abandons a more conventional layout in favour of lots of metallic silver hexagons on black stems, while the headlights repeat the theme, with several lighting points.

In the cabin
Inside, the cabin design takes its inspiration from aviation. The dashboard, for example, is designed to look like an aircraft wing its stretchable textile lining allows the structure underneath to be seen while the dials and air vents mimic jet engines.

At the same time, a smartphone is integrated into the vehicle, and all its functions are shown on the display and can be controlled using the rotary/push control.

As well as a new look, the concept car also previews some new technology, such as the engine. Mated to a dual-clutch transmission, the 2.0-litre unit is from Mercedes new M270 family, and combines turbocharging and direct injection to produce a high power output (207bhp) with low emissions and good fuel economy.

Finally, for the first time in a car of this class, the concept model also has a radar-based collision-warning system, which helps to avoid rear-end impacts.

This vehicle is strictly a concept car, but we expect the first of the production cars it previews to be launched in late 2012 and to go on sale in the UK in 2013.