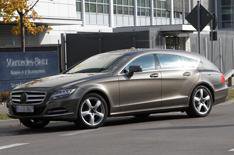 The CLS Shooting Brake blends coupe and estate styling in a slinky new body shape, and will go on sale in October 2012.

At an exclusive preview of the CLS 63 AMG model, we had our first chance to see the production version, which sticks very close to the 'Shooting Break' concept car that was unveiled in 2010. The car we saw had a special wood finish for the boot floor, which is likely to be available as an option.

Despite its sloping roofline, there's plenty of rear headroom and, thanks to a 'proper' rear seat there's seating for five.

Engine and trim options for the Shooting Brake are likely to mirror those of the standard CLS. We'd expect a small financial premium, so prices are likely to start at around 48,000 if the entry-level 250 CDI version is offered.

More details of the CLS Shooting Brake are expected to be announced later this month.