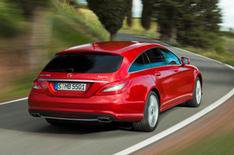 The Mercedes CLS Shooting Brake has been unveiled at the 2012 Goodwood Festival of Speed, ahead of it going on sale in November.

Mercedes describes the CLS Shooting Brake as a coupe, but it's effectively a swoopy, 'lifestyle' estate version of the CLS saloon. It'll be a rival for cars such as the Audi A7 Sportback, BMW 5 Series Gran Turismo and Jaguar XK Sportbrake.

The CLS Shooting Brake is more practical than the standard car, with a hatchback tailgate and a three-seat rear bench to boost the seating capacity from four to five. Total luggage capacity is 590 litres with the seats up and 1550 litres when they're folded down.

At launch, the CLS Shooting Brake will be available with two engines, both with a seven-speed automatic gearbox as standard.

The CLS Shooting Brake is expected to cost around 2000 more than the equivalent CLS, so a starting price of around 49,000 is likely. Customers will be able to order the car from August, with first deliveries in November.

Full pricing and specification will be announced closer to the launch.