More for you |
What Car? Real Range: which electric car can go farthest in the real world?2020 Hyundai i20 small car revealed: price, specs and release dateRanked: The most reliable executive cars - and the leastFord Focus ST long-term test reviewCar recalls: what are they and what to do if your car is recalled
Home
News
Mercedes E300 Hybrid
news

* Most upbeat Detroit motor show in years * 10 Detroit cars that caught our eye * NSX undoubted star of the show... 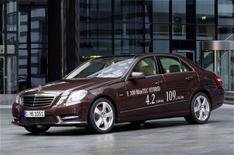 The Mercedes E-Class has been left behind by BMW's ultra-clean 520d Efficient Dynamics so on the face of it, the E300 Hybrid could be a rival for the frugal 5 Series.

In fact, the E300 is unlikely to undermine the four-cylinder diesel E-Classes, because it's expected to carry a price premium over the E200, E220 and E250 models. Instead we're looking at an alternative to the E350 CDI, and a potentially worthwhile one at that.

The E300 blends Merc's 2.2-litre, 201bhp four-cylinder turbodiesel with a seven-speed automatic transmission and an integrated electric motor. It's capable of 67mpg, Merc says, and will emit just 109g/km of CO2 that's the same figure as the 520d Efficient Dynamics, although the E300 does it with an auto 'box. BMW's star uses a six-speed manual transmission. The E300's performance seems strong, too; it'll crack 150mph and reach 62mph in 7.5 seconds.

It's due on sale in July, and is expected to cost around 38,000. That's almost 10k more than an E250, but crucially, around the same as a well-specced E350 CDI. Given that the six-cylinder diesel model emits 162g/km of CO2, the E300 Hybrid is going to look a strong proposition against it.