More for you |
Most and least reliable family carsWhat to do if you put the wrong fuel in your carVolkswagen Passat GTE long-term test reviewNew issue of What Car? magazine on sale nowTrue MPG: most efficient SUVs
Home
News
Mini E: leasing costs out soon
news

* 20 private customers * Leasing costs to be confirmed * More Clubman options on the way... 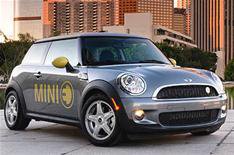 Mini says it will announce the price to lease its electrically powered Mini E soon.

Just 40 Mini Es will take part in the UK trial, with around 20 being allocated to the public - the rest will be run by public sector organisations and local Government agencies.

Leasing costs have yet to be confirmed, but those taking part will be expected to provide feedback to BMW on how the car performs in everyday life, how they cope with recharging facilities and their thoughts on the wider support infrastructure for electric vehicles.

The information will help BMW develop its next generation of electric vehicles and its ongoing Project i programme, which is aimed at developing city transport solutions.

More options and new models on the way
Mini is to offer more value-added options and accessories packages for the Mini Clubman, including:

BMW says that each pack will increase resale values of the Clubman by around 4%.

One will be a near-production version of the Countryman crossover, which goes on sale next year.

The other is expected to be an all-new Mini Coupe. This concept car will be very much a show car at this stage, says a Mini spokesman, with reaction from show-goers and the media instrumental in any decision whether to put the car into production.