More for you |
Used Ford Fiesta long-term test reviewWhat can I do about a security issue on my car? Best cars for less than £250 per monthWhy is my new car’s fuel economy so poor?Top 10 used electric cars
Home
News
Mini is mint on its 50th
news

Mini is mint on its 50th 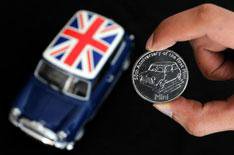 The Mini's 50th anniversary is being celebrated by a collection of special coins, it has been revealed.

The Royal Mint has honoured the British icon, which was designed by Sir Alec Issigonis, by producing 2000 sets of four 5 coins. The collection, produced in silver proof, will cost 175 a set.

Alongside the 5 coins, the Royal Mint has also produced a separate range of 1, 5 and 10 coins in silver and gold proof. Prices for these commemorative coins range from 9.95 - 275.
The coins' designs reflect the Mini's motorsport heritage, as well as its iconic influence over design and culture in the 1960s.

The Royal Mint's director of commemorative coins, Dave Knight said: 'The Mini's design has truly stood the test of time, proving itself to be as great a British icon as Concorde, red telephone boxes and double-decker buses.
'For this reason, we felt compelled to pay tribute to Sir Alec Issigonis' revolutionary Mini.'