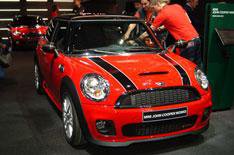 The most powerful production Mini yet makes its global debut at Geneva.

It's the latest John Cooper Works (JCW) model and its powered by a 211bhp 1.6-litre turbo engine. The JCW Mini features race-car-influenced gearbox, suspension and brakes, the debut of a new traction control system and the option of a unique body kit.

Even the speedometer has had to be changed to take account of the cars 148mph top speed. Acceleration from zero to 60mph is said to take just a fraction over six seconds.

The JCW models hatchback and Clubman go on sale in July with an expected starting price of 20,500.

The cars are based heavily on the Mini Challenge racing models. The four-cylinder engine has had exactly the same modifications as that fitted to the race cars but, despite the performance tuning, it is capable of nearly 41mpg and meets emissions laws not due in force until 2009.

There is up to 207lb ft of pull at just 1850rpm, with virtually no delay in boost from the turbocharger when you squeeze the accelerator, Mini says.

The brakes and suspension have also been adapted from the track cars. Theres a strengthened gearbox to handle the increased power and a new traction control system that allows some slippage so that the JCW pulls away progressively on greasy surfaces.

A leather sports steering wheel, air-conditioning and piano-black detailing are standard. Theres also an upgraded stereo and a button that makes the throttle and steering response even sharper. Seventeen-inch wheels with run-flat tyres are standard.