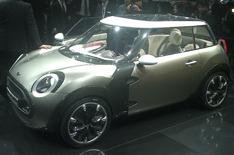 This is the Mini Rocketman concept car, but just how small is it?

Mini initially said it was just over three metres long, but then went on to admit it's actually 3.419m long. That's quite a difference, but it's still the smallest modern Mini yet a foot shorter than the current hatch and just over a foot longer than the 1959 original.

It's also more than a foot wider than the original, but it's around the same height.

It's a 3+1-seater, three-door with lots of neat features. Three seats slide forward and back, as does the instrument cluster. There's also a fourth seat for occasional short journeys.

The external door hinges hark back to the first original models, but they operate quite differently. They move out and forward at the same time, so they can be easily opened in tight spaces.

The tailgate is also a neat design. The top half includes a section of roof that allows it to be opened when headroom is restricted. The bottom section slides out like a drawer. It's all designed to make the Rocketman easier to live with in the city.

It's a very cool-looking city car, and it's very likely to make it into production, even if the complicated door and tailgate features aren't.

The lightweight carbon spaceframe is also likely to be lost in the interest of reducing costs. A production car could arrive as soon as 2014.