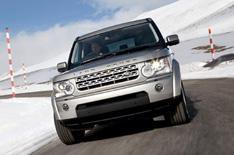 Model by model: Discovery 4
For tax reasons the petrol V8s won't be offered in this car in the UK, but it will get the new V6 diesel. This is the 272bhp unit from the Jaguar XF, detuned to 242bhp but with an undiminished 444lb ft of torque.

That's 29% more power and 36% more torque than in the old 2.7 V6 diesel, with average fuel economy of 30.4mpg and CO2 emissions of 244g/km gains in efficiency of between nine and 10%. Modifications have been made to the oil system and sealing to protect the engine in off-road use.

Land Rover admits that the Discovery was seen as 'aggressive' in some markets, so the revised front end and lights, along with the use of more painted metal in place of body cladding help to 'soften' the car as well as give it more of a luxury look. At first glance you could now mistake it for a Range Rover.

Most of the new convenience and safety options, including the virtual instruments and a touch-screen central display system with hard drive-based sat-nav system, will be offered.