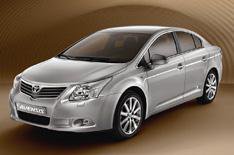 Toyota has released more pictures of its new Avensis family car, including the new estate.

The company released a photograph of the rear of the car last week, but can now see the front of the car, interior and an estate version.

Full details on the car will be revealed at the Paris motor show next month, alongside a production-ready version of the iQ citycar and the Urban Cruiser, a four-wheel-drive supermini.