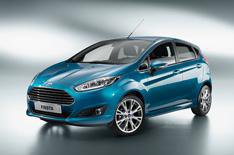 The new Ford Fiesta, which makes its public debut at the 2012 Paris motor show, will cost from 9795 when it goes on sale later this year.

It has a range of cosmetic updates and is available with more high-tech kit, and Ford's new three-cylinder 1.0-litre Ecoboost engine.

The 2013 Ford Fiesta's exterior makeover is most significant at the front of the car, where it gets a new bonnet, bumper, grille and headlights. It now has Ford's new grille, as seen on the new B-Max MPV and the 2013 Mondeo. Other changes are limited to new rear light lenses.

New materials and extra metallic trim are designed to give the Fiesta's cabin a classier look, to help it compete with cars such as the Peugeot 208, new Renault Clio and VW Polo.

Ford's MyKey system comes as standard. It's aimed at improving safety for young drivers and allows parents to set maximum speed and audio volume limits for different drivers. It also mutes audio sources until the seatbelts are fastened and stops driver aids and safety systems being turned off.

Ford Fiesta has a number of cosmetic changes, including new rear light lenses

Ford SYNC is a new connectivity system and includes functions such as reading incoming text messages, then allowing the driver to respond with a series of voice activated pre-set messages. It comes as standard on Titanium versions.

Active City Stop is a new safety feature similar to systems on the Volkswagen Up and various Volvo models that uses sensors to detect what's in front of the car and apply the brakes at low speed if it detects a collision is imminent.

Most significant cosmetic changes are at the front, with redesigned headlights, bumper and grille

Ford's three-cylinder 1.0-litre Ecoboost petrol engine which made its debut in the Focus is added to the updated Fiesta range. It'll be available in 99bhp and 118bhp forms. There's also a new 79bhp 1.0 litre petrol engine, a 1.25-litre with either 59bhp or 81bhp, and a 104bhp 1.6-litre.

A new 74bhp 1.5 litre TDCi diesel engine joins the Fiesta range, the other diesel option is the 94bhp 1.6-litre from the outgoing car.

The new model goes on sale in November 2012, with first deliveries expected in January 2013.

The new Fiesta ST will go on sale in the spring. It'll have a range of chassis and cosmetic upgrades and a turbocharged 178bhp 1.6-litre petrol engine.