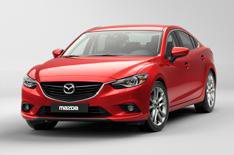 This is the all-new Mazda 6. The all-new family car will be available in both saloon and estate form when it goes on sale in January, lining up directly against rivals such as the VW Passat and Ford Mondeo.

The saloon gets its public debut at the 2012 Moscow motor show, while the estate will be revealed at the Paris motor show in September. Unlike the current model there won't be a hatchback version.

The cabin is also of a tangibly higher quality than the current car's and that of the CX-5 SUV with which it shares much of its switchgear.

Prices and specs for the UK have yet to be set but, if the rest of the Mazda range is a guide, it is likely to be competitive with its immediate family saloon and estate rivals. It will be slightly pricier than the current car, so a starting price of around 20,000 is likely.

This new 6 is the second Mazda, after the CX-5, to be built using the companys Skyactiv technology. The new platform has been designed to minimise weight and to maximise efficiency.

The new car is 50kg lighter than the current car and is powered by the companys latest generation of Skyactiv petrol and diesel engines, which have already been put to good use in the CX-5: a 173bhp 2.0-litre petrol or a 148bhp 2.2-litre diesel. All come with a six-speed manual 'box as standard, or an optional six-speed automatic. A 190bhp 2.5-litre petrol engine is being produced, but it wont be sold in the UK.

Exact economy and emissions figures aren't yet available, but Mazda's engineers are being bullish about the 6's prospects. Company insiders are expecting to hit the internal target of 105g/km of CO2 for the 148bhp diesel model, which equates to more than 70mpg.

Engineers used the Audi A4, BMW 3 Series and VW Passat as benchmarks, while Mazda partly developed the car in the UK to ensure that it works well on British roads. UK customers were also invited to try pre-production versions in order to give their feedback.

Insiders admit that improved ride and handling was the main focus during development and that both vastly exceed the current car's abilities, with levels of agility close to those of an MX-5. However, they also admit high-speed refinement will still not be quite up to Passat levels'.

The 6 will be available in either saloon or estate forms

The new 6 also uses Mazda's i-ELOOP brake-regeneration system, which harnesses energy to power the cars electrical systems and so saves on fuel.

Company insiders claim that special attention has been given to enhancing perceived quality inside the cabin.

Like the CX-5, the 6 also comes with the latest safety equipment, including a Smart City Brake Support system which up to 18mph, monitors distance of vehicles ahead and automatically brakes up if it detects that a collision will occur.

The new Mazda 6 gets the company's latest safety technology