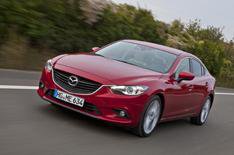 The new Mazda 6 has the BMW 3 Series and Ford Mondeo in its sights, thanks to a ground-up rethink that brings greater efficiency with few obvious compromises. ?

This 6 has been developed using Mazda's Skyactiv technology (first seen on the CX-5), which focuses on reducing weight and improving the efficiency of conventional combustion engines, rather than resorting to hybrid powertrains. ?

Two engines will be offered in the UK, each in two states of tune. The 2.0-litre petrol will come with either 143bhp or 163bhp. The 143bhp version marks the entry point for the entire range, and costs from 19,595. ?

When paired with a six-speed manual transmission, it delivers CO2 emissions of just 108g/km, putting it in a lower company car tax band than even the cleanest Ford Mondeo.

Whats the 2013 Mazda 6 saloon like to drive?
We tried the eco-champion of the range, the 148bhp diesel. It has a pleasing, linear power delivery, and there's enough torque to give the 6 more-than-respectable acceleration from around 1500rpm. The six-speed manual gearbox has a satisfyingly short throw, too.

Curiously, Mazda claims to have 'engineered in' what it considers a pleasing engine note when the motor is pushed, so while you'll find the unit remarkably keen to rev, you'll be well aware that you're working it hard. Things are much more civilised at a brisk cruise, though, because the engine spins away at barely 2000rpm. ?

Overall, the 6 isnt as hushed as a Ford Mondeo, but road and wind noise have been suppressed to acceptable levels.

We also drove the higher-powered diesel, which is ultimately slightly faster than the 148bhp version, but it is neither as smooth nor as flexible, so isnt worth the extra cash.
Unfortunately, whichever engine you choose, the 6 isnt particularly comfortable. Even on fairly mall 17-inch wheels theres a decidedly firm edge at low speeds, so you feel even the tiniest bumps through your backside.

Things dont improve much at speed, either, because theres still far too much patter on the motorway.

The firm suspension does at least help keep the 6 composed on winding roads, although the somewhat vague steering will prevent you from having any fun.

Whats the 2013 Mazda 6 saloon like inside?
The new 6 has a longer wheelbase than its predecessor and this means excellent legroom for both front and rear passengers.

Those in the front are unlikely to complain about headroom, either, but tall people may find the rear seats claustrophobic, because of the way the roofline sweeps in at the outer edges of the car.

The boot is a useful 489 litres, but the saloon body hampers versatility; the opening is comparatively small compared with hatchback rivals', including that of the Ford Mondeo.
Up front, the dashboard is reasonably uncluttered and looks smart enough, while the seats are comfortable and supportive. It's a pity, though, that Mazda hasnt managed to integrate its 5.8-inch colour touch-screen into the fascia more coherently; it has a whiff of 'aftermarket add-on' about it.

The quality of the plastics around the cabin wont exactly blow you away, either, but, crucially, they dont feel at all cheap or nasty.

Should I buy one?
With such impressive performance and fuel economy, the new Mazda 6 has one of the finest four-cylinder diesel engines weve ever tried.

It also looks good, is smart enough inside and should hold on to its value far better than a Ford Mondeo making it worthy of consideration not only as a company car, but also as a private buy.

This is particularly true of the entry-level 148bhp diesel in entry-level SE trim, which merits a four-star rating.

Unfortunately, we cant overlook that overly firm ride. The 6 is a car pitched at high-mileage drivers, and it simply isnt comfortable enough to fit that bill.

In fact, thats the only reason we reckon youre still better off with a Mondeo.

Read the Mazda 6 review for parents at Mumsnet Cars

By John McIlroy and Will Nightingale