New tech and designs from Bentley 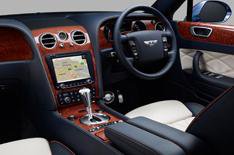 Bentley buyers can now specify their Continental Flying Spur and Flying Spur Speed with a series of new design combinations.

The Series 51 range of designs allows buyers to choose from thousands of colour and trim combinations put together by Bentley's designers.

First offered on the Continental GT and GTC in 2009, Series 51 designs were most notable in the cabin, where the colour and trim designers created a wide selection of three-tone interiors.

New technology
All 2012 model-year Bentley Continental Flying Spur and Supersports coupe and convertible models will now get a new touch-screen infotainment system that provides interactive maps and a 30GB hard-drive.

An eight-inch screen displays the cars audio system, telephone, ride and comfort settings as well as the new navigation system, which uses both an in-car hard-disc drive and a DVD player to access route data.