Volkswagen had added some spice to the city car class with the sporty new Up GTI. The car it has to beat is the Abarth 595...

The new, most powerful Up variant allegedly harks back to the original Golf GTI of 1976.

Here’s a controversial statement for you: forget the 1980s and 1990s; the golden age of the hot hatch is right now. If you want a practical family car that’ll have you grinning like you’re trying to swallow a banana sideways, there has never been a better time to buy. Well, almost.

You see, while the Honda Civic Type R, Ford Focus RS and Mercedes-AMG A45 are some of the best hot hatches yet, the smaller, cheaper options are either currently not on sale (think Ford Fiesta ST and Suzuki Swift Sport, although new versions of both are just months away) or a bit underwhelming. Still, one car has continued to offer an affordable pocket rocket experience for the best part of a decade: the Abarth 595.

But this turbocharged terror might not have things its own way for long, because there’s a new challenger from the company that popularised the practical performance car in the first place: Volkswagen. For the first time, there’s a GTI version of its smallest model, the Up. 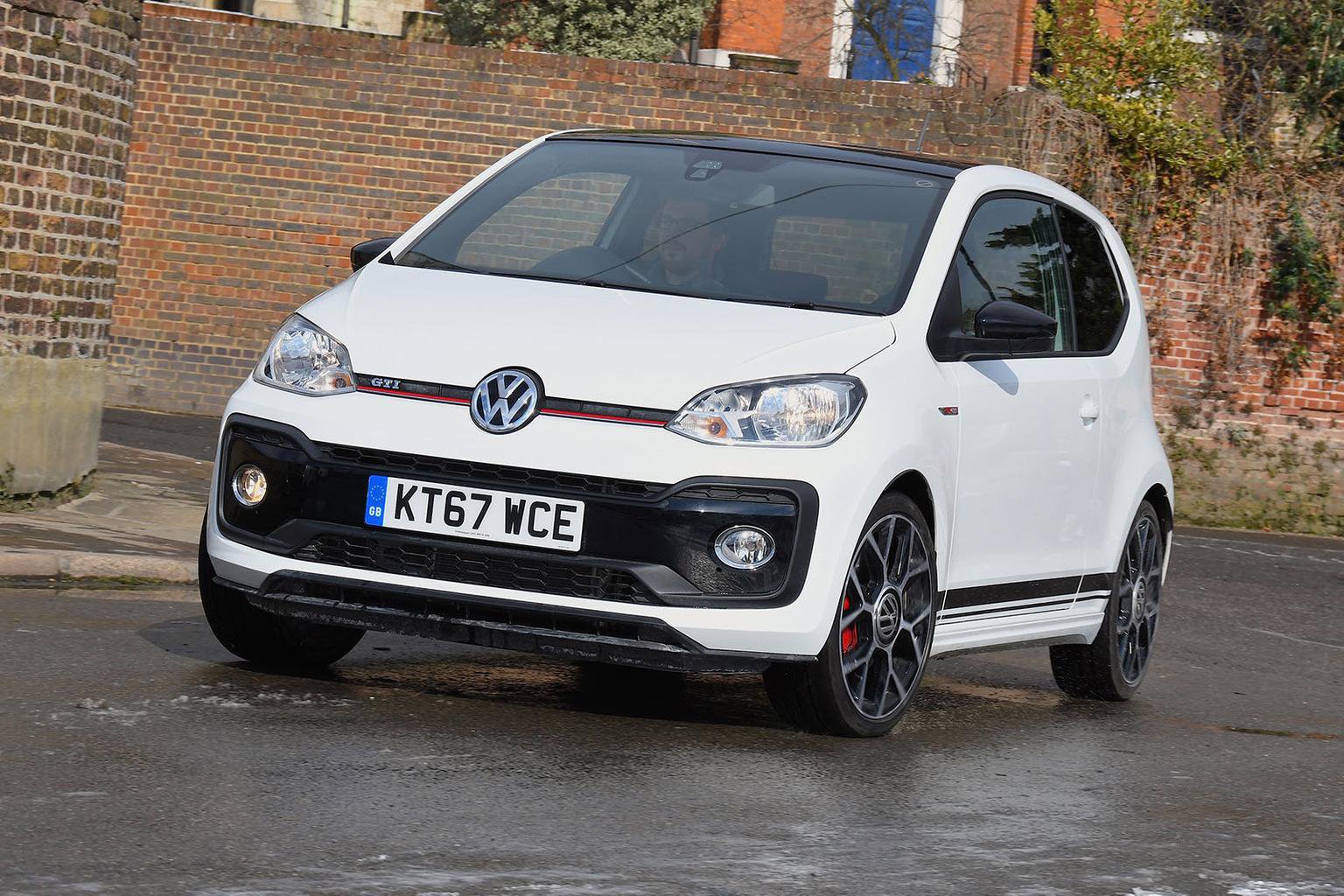 Fire up either car and you’re treated to a fruity soundtrack, albeit one that’s enhanced by a speaker in the Up. There’s no trickery in the 595 – just a very vocal pair of tailpipes. We like the thrummy tunes of the Up’s 1.0-litre three-cylinder motor, but it’s the 595’s raspy note that will get your pulse beating faster.

And it’s not like the 595 is all mouth and no trousers, either. Its 1.4-litre four-cylinder engine gives it a 30bhp power advantage over the Up (143bhp to 113bhp), and even in slippery conditions it can scrabble from 0-60mph in a brisk 8.0sec – nearly a second faster than the Up.

The Up’s permanently activated traction control is partly to blame for that. While the 595’s TTC (Torque Transfer Control) button allows just enough wheel-spin for a quick getaway, the Up’s system is far too eager to intervene, making rapid launches frustratingly tricky.

On the road, the difference is much smaller. The Up’s engine pulls harder from low engine speeds and its manual gearbox has six gears to the 595’s five. This means the Up’s gears are stacked closer together, aiding responsiveness. You’ll need to change down more in the 595 to keep up, although this is no hardship because the gear-lever is close to the steering wheel, the shift is pleasingly light and the 595 is still the faster car when you thrash it. The Up’s ’box has an even shorter throw and is more precise, though.

Tykes like these are less about straight-line speed and more about agility and entertainment. Both initially feel nimble and resist leaning over in corners well, despite being relatively tall and narrow. 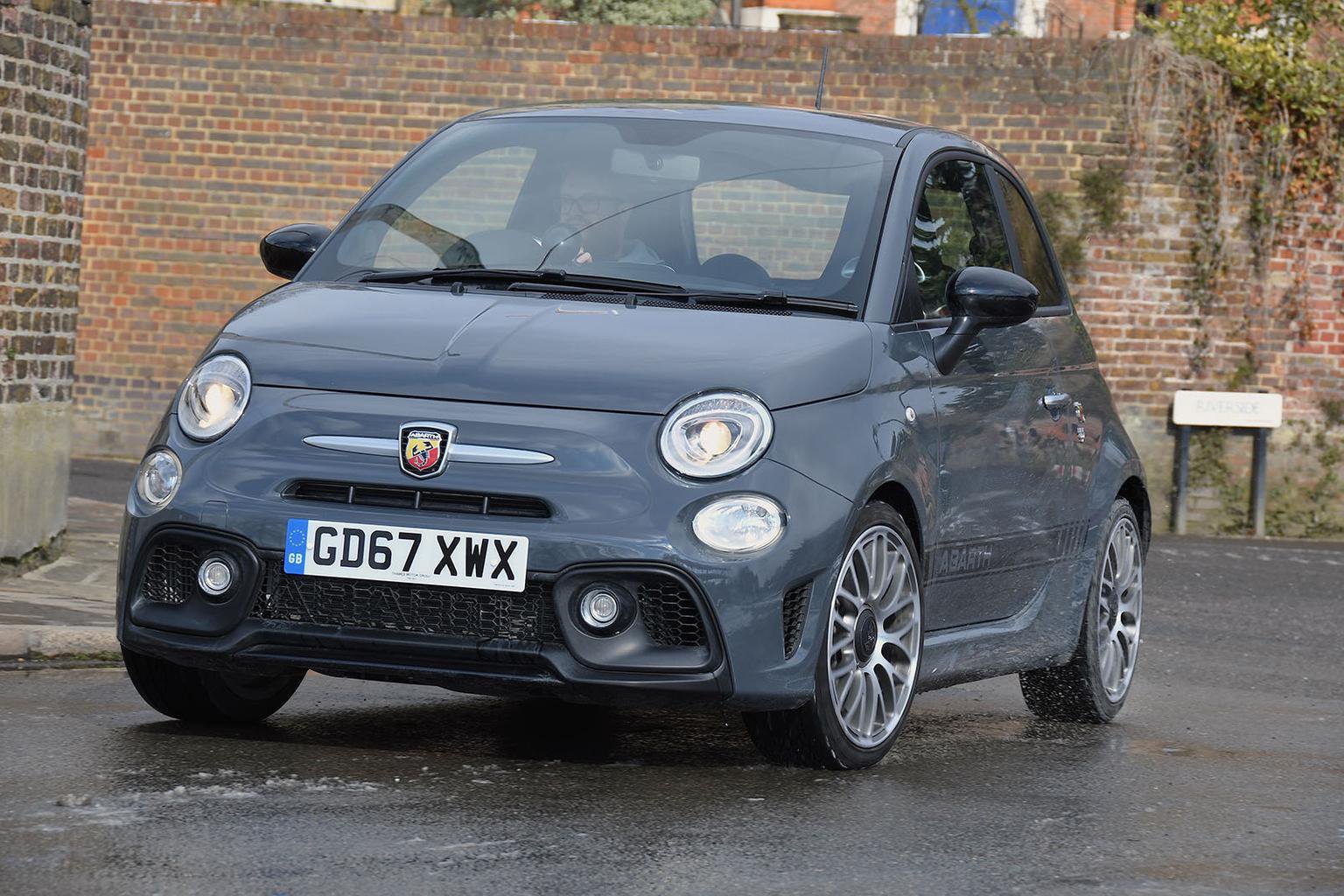 However, the 595’s steering doesn’t communicate what the front tyres are doing particularly well, and hitting the Sport button just adds a lot of unwelcome weight (as well as sharpening accelerator response). Whichever mode you’re in, you’ll be amazed at how huge the 595’s turning circle is – a trait that quickly annoys in city driving.

The Up has much better-weighted steering, a greater sense of connection to the front tyres and a turning circle that isn’t beaten by the QE2. You can also trust its front end more, because the Up grips at cornering speeds that will have the 595 running wide.

However, neither car has the kind of boisterousness that marks out a great hot hatch. In the best of this breed, you can feel the car moving entertainingly beneath you as you enter and exit corners, but the 595 and Up are restricted by stability control systems that can’t be turned off and stop you venturing close to the limits of grip. That’s great in a sensible family hatchback but not in a car that’s supposed to be fun.