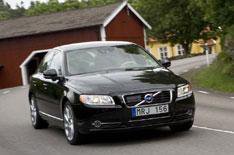 The S80 is a mildly updated version of Volvo's BMW 5 Series rival, with a more powerful version of the existing five-cylinder 2.4-litre diesel engine.

A stop-start system has also been fitted to help cut CO2 emissions by 10g/km to 129g/km dropping the S80 two company car tax bands in the process and fuel economy is improved by 4.4mpg to 57.7mpg.

Along with every other model in the S80 range, the D5 also gets a redesigned centre console to house a new Sensus infotainment system. Volvo's City Safety device which uses lasers to watch the road ahead and automatically applies the brakes if it detects you're about to hit the car in front is now standard, too.

The D5 diesel engine now delivers 212bhp up from 202bhp and 309lb ft of torque. It's noticeably punchier when revved and can haul the big Volvo from 0-62mph in 7.9 seconds. It's also flexible, pulling strongly from around 1500rpm.

The bad news is it's rather noisy and unrefined. The five-cylinder warble isn't an unpleasant sound, but it's always there, making its way into the cabin even when you're up to cruising speed not ideal in a car that'll spend much of its time on the motorway.

Don't expect to have much fun on twisty roads, either, because although the S80 grips well, its vague steering will soon have you willing the road to straighten out.

The S80's suspension is also thumpy over poor road surfaces, and the manual gearshift is vague. There's an automatic Geartronic 'box available, but it adds a further £1485 to the price and increases CO2 emissions to 159g/km.

Volvo has tried to give the S80's ageing cabin a lift by offering a range of colourful finishes for the redesigned centre console that appears to float and the seats. However, the whole driver environment isn't as classy as that of an Audi A6 or BMW 5 Series.

Volvo's new Sensus infotainment system brings some new features, however, including the ability to stream music from your mobile phone via Bluetooth. It also gives you the ability to control most of the S80's safety systems through one central hub.

However, it's less intuitive to use than Audi's MMI and BMW's iDrive systems because there isn't a central wheel at your fingertips. Instead, you use a mixture of buttons and knobs on the centre console.

In theory it's also possible to control the whole system using buttons on the steering wheel and your voice, but the voice activation is slow and doesn't always pickup what you're saying.

Consider power rather than price and this D5 model is a closer match for an Audi A6 3.0 TDI or a BMW 525d which both start at around £34,500. Once you've factored in how much better the Volvo's German rivals are in key areas, though, you'll probably be willing to pay the extra or sacrifice a few bhp.

For that reason, we'd recommend only the entry-level 113bhp 1.6 DRIVe model. Yes, it's slow at times, but it's hugely cheaper than any other executive car to buy and to run.