More for you |
Why I bought a Nissan Leaf - owner reviewWhat Car? Real Range: which electric car can go farthest in the real world?10 ways to bag a used car bargain in 2020Are electric cars more expensive to insure?How long do electric car batteries last for?
Home
News
Nissan Leaf prices set to fall
news

* Currency fluctuations raised its price by 2k * Car and batteries will soon be made in UK * Prices should dip below 25,000... 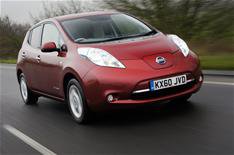 Nissan says the price of its Leaf electric car is set to drop significantly.

The Leaf's price was recently hiked by 2000 to 25,990 (including a 5000 Government grant) in the UK as a result of currency fluctuations with Japan.

However, Nissan's factory in Sunderland will start making the Leaf's batteries next year, while production of the Leaf itself starts in 2013, and Nissan's corporate vice-president of global communications, Simon Sproule, said the move to European-based production would bring prices back down.

'Building the cars and batteries in Sunderland will bring prices down significantly because of the inherent savings certainly below the original launch price,' said Sproule.

Why I bought a Nissan Leaf - owner review

How long do electric car batteries last for?